VPNs Were a Temporary Fix, But Its Time for a Long-Term WFH Strategy

This week Twitter became the first large company to formally announce that their employees can continue to work from home forever. But rest assured they are far from the last company to make an announcement like this. Everywhere you look there are new surveys and reports stating that companies are making similar long-term or permanent remote work plans. For example, this survey from Gartner revealed that 74% of CFOs plan to shift some percentage of their employees to a remote work structure permanently.

As we've discussed before, the suddenness of the shift to remote work due to COVID-19 meant that a lot of organizations had to send people home before a formal work-from-home policy or strategy was put in place. As a result, many organizations resorted to temporary fixes - like VPNs - with the hopes that they would hold up long enough to get them through the lockdowns. But now that it's clear that Remote Work is going to be a permanent fixture in the future of work, it's time to replace those temporary fixes with long-term Remote Work strategies. 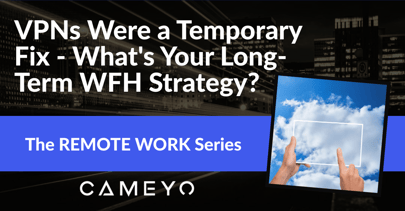 VPNs have severe issues when it comes to security, user experience, app compatibility, complexity/maintenance, and data protection. For a deeper dive into the issues surrounding VPNs, take a look at this post. But if you're currently using VPNs, you're likely already painfully aware of these problems.

So you've probably gone looking for a better solution, and there's a good chance that someone has recommended virtual desktop infrastructure (VDI - like Citrix) as an alternative. But VDI is decades-old technology that hasn't adapted to the cloud, and causes arguably greater issues than VPNs when it comes to cost, complexity, and user experience. For a more in-depth look into why VDI isn't suited for enabling Remote Work, check out this post.

If you're looking for a permanent solution that will enable you to give all of your people highly-secure access to all of their business-critical applications on any device, now's the time to take Cameyo for a spin. Cameyo gives you:

Any Windows or Internal Web App on Any Device - No matter what type of devices your remote workers are using, including BYOD or unmanaged devices, Cameyo enables them to access all of their applications, from the browser. That means none of those applications need to be physically installed on their devices, but they still get the same exact user experience as the full desktop version of the software, just running in a browser tab instead.

A Better User Experience than VPNs and VDI - VPNs are notoriously frustrating for your end users, with performance issues and frequent disconnections. VDI provides a similarly clunky user experience, and performance lag can be a productivity killer. Cameyo eliminates the need for VPNs and virtual desktops, while providing a seamless user experience that can provide native application performance, even over 2G/3G network connections.

Significant Cost Savings - Cameyo's application delivery platform is the only one capable of supporting dozens of users per instance, rather than requiring a separate server for each user. And Cameyo's simple, flat-rate subscription fees include a cloud usage fees, eliminating the bill shock that accompanies other products. On average, Cameyo saves customers 75% over Citrix.

Better Security - Cameyo separates the applications your people need to use from their device's OS for greater security. And Cameyo's NoVPN capabilities eliminates the need for VPNs, meaning that people's potentially infected personal devices aren't given access to your corporate network like they are with VPNs. Cameyo also has advanced security features like Port Shield, which automatically closes all RDP ports by default and only opens them as needed for authorized users.

Your company and your people are facing enough change in these trying times - you shouldn't have to change the way you work or the tools you rely on for productivity. Cameyo gives you simple, secure access to all of the applications your people rely on, from anywhere. Go ahead and start your free trial today and see how easy it is to publish your first application within minutes with Cameyo.