The Environmental Impact of Remote Work as the New Normal

While Twitter and Shopify may have been among the first large companies to announce that they will be allowing their employees to work from home permanently, they certainly won't be the last. In fact, the list of companies who have announced a permanent change to remote work just keeps getting longer. 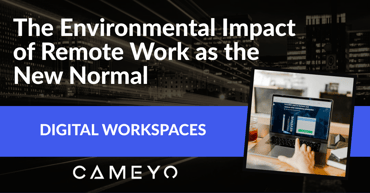 So much so, that we're approaching the point in history where companies will no longer need to make an announcement that they are embracing a permanent work from home policy - it will just be expected and assumed that everyone will embrace remote work moving forward.

This is simply the new normal.

And while we've written at length about the business benefits of remote work, there's another really interesting trend we've been seeing over the past couple of months. And that is the environmental benefits that have been seen worldwide since everyone began sheltering in place.

For example, Science Daily reports that two new studies in AGU's journal Geophysical Research Letters found nitrogen dioxide pollution over northern China, Western Europe and the U.S. decreased by as much as 60 percent in early 2020 as compared to the same time last year. Those studies also show that particulate matter pollution has decreased by 35 percent in northern China.

One of the authors of the reports stated that "such a significant drop in emissions is unprecedented since air quality monitoring from satellites began in the 1990s."

This is phenomenal news, and has the potential to have a deep and lasting impact on the environment moving forward - if certain behavioral changes adopted during lockdown remain in place. With that said, the World Economic Forum reports that, as restrictions were lifted in Wuhan, China - the pollution levels quickly returned to 2019 levels.

But that doesn't necessarily mean that we have to lose out on all of the benefits that have been gained thus far. And the new normal of remote work - especially permanent remote work - can play a key role in helping all of us, globally, continue to combat air pollution.

A study by INRIX back in March showed that travel times into major cities like Chicago had been reduced by as much as 77% due to the lack of people commuting. Of course, once the lockdown ends many people will indeed need to go back to a physical work location that is outside of their home. But there is also a considerable percentage of people who will be allowed to work from home permanently. Some percentage of those people will likely split their time between the office and home, but a recent OnePoll survey revealed that 67% of US workers do not feel comfortable going back to the office yet.

Which raises the question - will companies start to see the transition to the new normal of remote work as an opportunity to make a commitment not only to their employees' safety, but as a commitment to the environment? Could the amazing environmental results we've seen thus far be a catalyst for remote work policies becoming part of companies' Corporate Social Responsibility (CSR) programs?

This would be a great outcome. But the reality is that, unless companies can make it simple and affordable for all of their people to access everything they need to be productive from anywhere, this simply won't work. And that's why we're seeing such a dramatic increase in adoption of digital workspaces like Cameyo, which give ALL of your people - whether they end up back in an office or continue working from home - the same, unified experience and access to all of the apps and resources they need to do their jobs, from any device.

So, as adoption of digital workspaces and virtual application delivery increases, the better shot we have at a lasting impact. If more companies feel empowered to embrace the new normal without disrupting productivity, they then have the potential to eliminate some offices (and therefore, some commutes), which increases our chances of preserving some of the gains we've achieved in air quality and pollution levels worldwide.