While there is a lot of talk in the industry about virtual desktop infrastructure (VDI) and Desktop as a Service (DaaS) products, those products (like Citrix, VMware, and Nutanix) simply don't work for many organizations' needs. We talk to companies every day who have tried those technologies and either:

Take Ur&Penn, a large Swedish retail chain with 126 stores, for example. Ur&Penn was making a transition to Chromebooks, and they needed a solution for delivering all of their legacy Windows applications to those Chromebooks as well. Ur&Penn was already working with Nutanix on something else, so they decided to give Nutanix's Xi Frameproduct a shot. But they ran into two key issues. 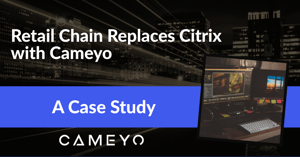 “First, we realized quickly that Xi Frame’s architecture requires one server for each and every user. So right away, this became an incredibly costly solution,” said Emir Saffar, CIO at Ur&Penn. “But more importantly, the Xi Frame product for on-premise simply didn’t work as advertised.”

“I told them – ‘How dare you charge money for such a solution? Nothing is working as expected. You should be ashamed, it still feels like a beta version’,” said Saffar.

Ur&Penn brought in a technician to try and fix the deployment – but the technician couldn’t get it working either. The technician then told Ur&Penn that they had previously worked for Citrix, and recommended that they try Citrix XenApp instead. So they began down the path of deploying Citrix.

“Citrix was even more complex to set up than Xi Frame, so we had to hire an outside engineer to come set everything up, which just added more expense,” said Saffar. “Everything was difficult. Citrix required setting up a Golden Image, there were a ton of issues with roaming profiles, and more.”

It took the outside engineer several weeks to configure and deploy everything, and even once it was deployed, Ur&Penn found that things still weren’t working in a way that provided a satisfactory user experience.

“Our users were always having issues logging in, and the only solution was to repeatedly delete and re-set their profiles multiple times,” said Saffar. “So, even though it was technically deployed, it wasn’t really ‘working’.”

After months of trying to deploy Xi Frame and then Citrix XenApp, Ur&Penn realized they needed to replace Citrix. That's when they turned to Cameyo.

“Unlike Nutanix Xi Frame and Citrix XenApp, there is no complicated infrastructure to deploy and manage. Not only were we up and running with Cameyo in less than three hours, but we can also deploy new apps almost instantly. We never have to re-image or deal with a Golden Image. Cameyo could not be easier,” said Saffar.

“Right off the bat, Cameyo doesn’t require any complex infrastructure and you don’t need to hire a third-party engineer to set it up – so that’s a huge cost savings rights there. Also, since Cameyo is able to support dozens of users per instance instead of an architecture that requires one server for every user, that provides dramatic savings as well.”

Check out the complete case study here to get the details of why this retail chain replaced Citrix with Cameyo, and see whether or not Cameyo's Virtual App Delivery platform is right for you, too. Or go ahead and start a free trial of Cameyo here.