With the majority of the world's workforce shifting to remote work over the past 7 months, organizations are finding that their attack surface has grown significantly. Recently a spate of reports have come out identifying a massive spike in attacks targeted at remote workers, including:

“As organizations shift to a model where they must enable remote work on a permanent or hybrid basis for much of their workforce, their attack surface can grow significantly due to RDP and HTTP vulnerabilities,” said Mark Bowker, Senior Analyst at Enterprise Strategy Group (ESG). 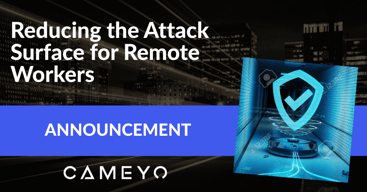 The need for remote productivity must never come at the expense of security. Which is why today we announced that we've expanded our Cameyo Port Shield technology to increase protection against the rise in exploit, brute force, and ransomware attacks aimed at remote workers. In addition to protecting against RDP vulnerabilities, Port Shield now extends to HTTP/S ports as well - reducing the attack surface for remote workers by automatically keeping all RDP and HTTP/S ports closed, except when needed.

“Some technologies currently being used to enable remote work were developed decades ago, and were designed for a world where remote work was the exception, not the widespread norm,” said Eyal Dotan, Founder and CTO of Cameyo. “Cameyo is a cloud-native Digital Workspace platform that was designed from the ground up with security at the foundation. The extension of our Port Shield technology to HTTP ports is the latest evolution of our core security functionality, designed to reduce your attack surface while still making it incredibly simple to securely deliver all of the applications your people need to be productive on any device.”

Extending Cameyo Port Shield’s capabilities to HTTP ports provides yet another layer of security for organizations that need to ensure their people have access to all of the business-critical apps they need to be productive while securing both the remote workers and the corporate network at the same time. Port Shield works by managing the Windows Firewall and keeping a server's RDP and HTTP/S ports closed at all times, then dynamically opening them only for certain authenticated users, only as needed.

Security is foundational to Cameyo's approach to Digital Workspaces. Our founder here at Cameyo is Eyal Dotan, who has spent his entire career in security, and holds 12 patents in the space. He was previously CTO at BufferZone, where he helped build its patented endpoint security technology. Prior to that he was the creator of Ivanti Endpoint Security (formerly the award-winning ViGUARD, which was acquired by Ivanti), one of the first Host Intrusion Prevention (HIPS) software solutions of its kind. Eyal was the Founder & CTO at ViGUARD, which was the first protection technology to have blocked malware such as ILoveYou, Melissa, Klez, Blaster, and Sasser viruses without using black-list signatures.

As a result, Eyal's approach to building Cameyo has always been with security developed at the core, as the foundation of the platform - never as an add-on. Thus, the expanded functionality of Port Shield has been rolled out to all users of the Cameyo platform as of today, and is included at no additional cost.

If you're looking for a Digital Workspace solution that dramatically simplifies the IT and user experience while ALSO providing an enterprise-grade Zero Trust approach to security, get started with your free trial of Cameyo today. Or you can read the full Cameyo Port Shield announcement here.