How EasyPower Increased Software Trials by 400%

Most software companies have a similar goal when it comes to marketing to new customers – make it as easy as possible for prospects to demo/trial your software. The sooner the potential customer can experience the power of your solution for themselves, the shorter the sales cycle will be.

Yet, today, many “Free Trials” require the potential customer to download and install a demo version of the software, which results in a large percentage of interested parties never actually completing a trial. 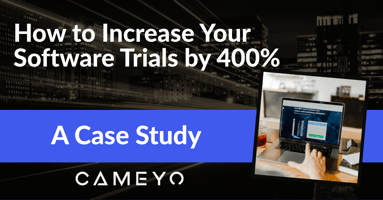 This common issue was exactly what EasyPower was facing with its software demo process.

EasyPower provides software tools for intelligently designing, analyzing, and monitoring electrical power systems. The EasyPower product suite delivers a full lineup of powerful Windows®-based software tools for electrical system design, and with the fastest processing speeds on the market, it delivers instantaneous, accurate results to help companies make more intelligent decisions. But, like most software providers, EasyPower needed to make it easier for potential customers to experience their suite.

“Previously, customers would come to our site, fill out a form, and then someone from our team would have to reach out with a link and a code to give them access to a demo version of our software,” said Stan Spencer, Director of Sales at EasyPower. “But we found that a lot of people had issues installing the software – or simply didn’t have time to, and gave up – so we were missing out on opportunities. Nothing’s worse than having a customer come to your site, show interest, and then to lose them just because the process is too complex.”

Where Citrix and Microsoft Couldn't Deliver

When providing prospects with access to demo software, it’s not just a matter of how simple it is to access, but also what the user experience will be.

“When we first started looking at solutions for giving people remote access to our demo software, we considered Citrix – but that would have actually increased the amount that our prospects would need to install and made the experience more difficult. That was a deal-breaker,” said Spencer.

The next stop on EasyPower’s search for a solution was Microsoft Azure with an RDP deployment, which EasyPower thought would help simplify the process.

“Azure and RDP was less clunky than Citrix, but it still required people to download and install before accessing the demo software. Plus, when we’d send a prospect the Azure link, we only had 10 slots for demos at any given time, which was a big limitation. Also, even though Windows has RDP, the user still needed admin rights in order to run the RDP client, which was yet another barrier.”

“As you can see – Azure and RDP simply wasn’t a viable option for us, either,” said Spencer.

EasyPower needed a solution that would enable them to give everyone instant access to their demo software, on any device. That’s when they discovered Cameyo’s virtual application delivery platform which enables companies to deliver the full desktop version of their software to any device, from the browser, without the software being installed on the end user’s device.

“With Cameyo, there’s absolutely nothing to install. We went from a process where we would send a prospect a code to download the demo within a day or two, to giving everyone instant access. It really couldn’t be simpler,” said Spencer.

“We’ve been using Cameyo for two years now, and we now do 100 percent of our trials through Cameyo,” said Spencer.

To see the rest of the results EasyPower was able to achieve with Cameyo - including a 400% increase in trial conversions - check out the full case study here.