There’s often confusion about when Cameyo was founded as a company and when we launched our platform. The reason for that is because our technical founder and CTO, Eyal Dotan, first recognized the need for virtual application delivery - the ability to deliver legacy Windows applications to any device - over 10 years ago. Back then, he created a free program called Cameyo Packager, which enabled individuals to package single applications and run them on any device - and today over 3 million people have utilized that free tool.

Based on the feedback from Packager users and adoption of the cloud, Eyal presciently predicted the huge role that cloud migration would play in organizations’ digital transformations, and realized that one of the most common roadblocks to those cloud migrations was going to be the inability to utilize legacy Windows apps in the cloud. He began building the enterprise-grade version of the Cameyo virtual application delivery platform to solve that problem. In the latter part of 2017, Eyal had successfully tested the new platform with several enterprise customers and joined forces with our CEO, Andrew Miller, to commercialize the solution. So in 2018, Cameyo, Inc. was founded, and the Cameyo platform as it exists today was launched in the first quarter of 2018. 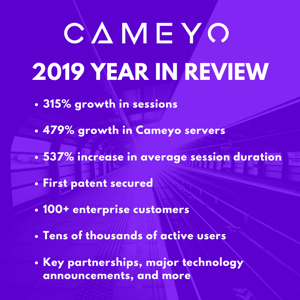 Why the trip down memory lane? Because after launching the Cameyo platform in early 2018, 2019 marked our first full year of commercial availability. And what an incredible year it was.

This post will take a quick look back on all that was accomplished in 2019, but before we do that, we wanted to thank you. You - our customers, partners, champions, and supporters - are truly the reason for our success in 2019.

To our customers - you’re the reason we do this, and it has been an honor helping you deliver all of your Windows apps to any device, so that your tens of thousands of users can utilize the Windows apps they need anytime, anywhere.

To our partners - your commitment to helping organizations with their digital transformations is exceptional. Thank you for selecting Cameyo to be your partner for eliminating the App Gap, and making it simple for every organization to bring their apps with them during their cloud migrations.

And to our champions throughout the industry - thank you for recommending us to your colleagues, for providing insight & feedback, and for helping spread the word about Cameyo. We all know that building the best solution doesn’t guarantee you’ll win - but having a passionate tribe like we have with you is what proves we’re on the right track.

With that, let’s take a closer look at some of the numbers, followed by some highlights of 2019:

The numbers alone are exciting, but that’s only part of the story. Here are some of the big milestones and accomplishments that took place in 2019 at Cameyo:

In June, we introduced our Cameyo Session Sync technology, which provides data persistence that enables a user’s settings and files to follow the user from session to session. This means that everything a user does during a Cameyo session is synced to and from Google Cloud Storage. Cameyo’s cloud instances are multi-tenant and stateless, therefore users are always connected to the most quickly-available, resource-optimal, and cost-effective instance. Unlike other products, Cameyo is the only solution that works on a one-to-many basis - so a single cloud instance can serve many users at once, and a single user can be working on multiple instances at once.

In August, we received our first patent – U.S. Patent No. 10,382,446 – for our platform design that emulates cloud storage for Windows applications, enabling Windows applications to be delivered from the cloud. The patent covers Cameyo’s ability to:

In September we launched our new RDP Port Shield security technology to proactively protect customers from the dramatic increase in RDP vulnerabilities across the industry, including brute force attacks and ransomware. And to empower all organizations with more data about potential threats to their networks when using RDP or Citrix, we also released a free open source RDP monitoring tool – RDPmon – that any organization can use to identify the attacks taking place over RDP in their environment. By helping organizations identify and proactively protect against these threats, we doubled-down on our commitment to further ease cloud migration by helping to mitigate the related security concerns.

In October we announced support for GPU-accelerated applications, extending the cost-savings of our multi-tenant platform to all Windows applications – regardless of how graphics-intensive they might be. Other virtual app delivery products require a separate virtual machine for each individual user – regardless of whether they are using CPU- or GPU-based apps. Cameyo is the first multi-tenant virtual app delivery platform that enabled dozens of users per instance for CPU-based productivity apps, and with this announcement we patented cost-saving technology to GPU-based applications. This dramatically simplifies and reduces the cost of delivering all Windows applications, including GPU-based apps, to any device. As a result, organizations can eliminate a key barrier to cloud migration – application delivery – while reducing the overall cost and complexity of that migration.

In November we announced full support for Microsoft Azure, enabling organizations to utilize Cameyo within their own instance of Azure. This extended all of Cameyo’s premium cost-savings and performance features like elasticity, usage optimization, and Cameyo’s Session Sync and RDP Port Shield technology – previously only available with Cameyo’s Fully Hosted service on Google Cloud Platform (GCP) – to all organizations utilizing Azure. This enables organizations to bring their own Azure cloud while still experiencing the control, cost savings, infrastructure reduction, and security that Cameyo is known for.

We expanded existing partnerships and aligned with quite a few new ones in 2019. We now have six partnerships with Google including Google Cloud (GCP), Google Chrome Enterprise, two Google for Education partnerships, Google SaaS Initiative, and more. We also have incredible distribution partners in Synnex and SHI, as well as industry partnerships with leaders like SADA, Coretek, ASG Africa, Neverware, Helio Summit, and Apisec. And we have several more large, strategic partnerships that we’ll be announcing in early 2020.

2019 was a spectacular year of growth for us here at Cameyo, but we’re just getting started. Thank you again for all of your support, and we look forward to sharing some big 2020 news with you soon!