According to Statcounter.com, 27% of Windows desktops are still running Windows 7 - despite the OS officially reaching the end of its life on January 14. Tech publication Gadget confirms this, stating that “around 28 percent” of the estimated 1.3 billion active Windows users are still on Windows 7. That means that there are still roughly 364M Windows 7 devices in the enterprise today. 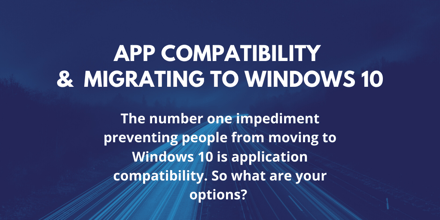 Perhaps even more interesting is that in a recent survey of Windows 7 users, almost half indicated they like Windows 7 and don’t want to migrate to a newer version of Windows. That survey revealed that the top reasons preventing people from migrating away from Windows 7 were: 1) fear of the unknown with Windows 10, 2) the cost of upgrading, and 3) problems with moving to Windows 10.

Application Compatibility is the Main Roadblock

Those roadblocks are consistent with what Microsoft itself is saying about the migration away from Windows 7 - especially when it comes to app compatibility. Naren Narendra, Microsoft’s Global Sales Lead for Windows Virtual Desktops, has said that the number one impediment preventing people from moving to Windows 10 is application compatibility. Most of the organizations that haven’t migrated still rely on at least a handful of business-critical apps that are not yet compatible with Windows 10, so those organizations view migration as something that would dramatically impact their productivity.

You may be asking - but what about the Microsoft App Assure program, which proposes to “engage 3rd party software vendors to help with Windows 10 apps and address issues with Office 365 ProPlus macros and add-ins.” The idea is that the App Assure program will help make all legacy apps compatible with Windows 10 over time. But there are several catches with that program, as we covered in a previous blog post here. At the end of the day, for Windows 7-based applications where the developer does not plan to redevelop for Windows 10, those applications will still have issues.

The Cost of NOT Migrating

It may seem easier to just stick with Windows 7, and some have made the argument that you can do so without worrying about security issues if you purchase the Extended Security Updates (ESU). Even though Windows 7 is officially EOL, Microsoft will keep Windows 7 patched, but only for Windows 7 Professional and Enterprise users who have purchased ESU. However, over time the cost of this ESU service will surpass the expense of moving to Windows 10, especially as the ESU licenses must be renewed every year, and are expected to get more expensive each year (based on how Microsoft has priced renewals in the past).

So, What Are My Options?

Are you planning on moving away from Windows altogether (moving to MacOS, Chromebooks, Linux, etc.) - but can’t because you still need access to certain business-critical Windows apps? No problem - virtual application delivery platforms can separate the application from the OS entirely to give you the ultimate freedom in the devices and OSs you choose.

So regardless of whether you’re looking to ease the migration to Windows 10 or if you’re planning on moving away from Windows, a virtual application delivery platform will help make the process far simpler and more cost-effective.

Update: January 23, 2020 - According to Windows Central, a new study released today found that nearly 90 percent of large companies with more than 10,000 employees still run Windows 7. That number drops to 61 percent for companies with fewer than 1,000 employees - but that's still a remarkably high percentage of enterprises that still run Windows 7. And it's not just enterprises. The numbers are similar for education and government sectors. The study found that both verticals have a Windows 7 deployment rate above 80 percent (84 percent for education and 82 percent for government).

The findings from BitSight, which suggests in their blog post about the data that the simplest thing for companies to do is migrate to a newer operating system. But as discussed above, application compatibility continues to be a huge hurdle. And with roughly 90% of large companies still running Windows 7, that perfectly highlights how difficult this transition is.

Virtual application delivery platforms can help companies of all size quickly and easily provide their people with access to legacy Windows 7 apps on any device, regardless of the OS, making it simple to make the transition to Windows 10 (or any other OS they're interested in) without losing access to their business critical apps.

Update: January 28, 2020 - The Verge has revealed that, after issuing the final updates for Windows 7, Microsoft has now acknowledged a new bug. Microsoft has stated that “After installing KB4534310, your desktop wallpaper might display as black when set to Stretch."

Originally, Microsoft said that - while it was indeed working on a Windows 7 fix - the fix would only be available “for organizations who have purchased Windows 7 Extended Security Updates (ESU)." However, they have since reversed direction and are now saying the fix will be available to everyone running Windows 7 and Windows Server 2008 R2 SP1. This effectively means that Microsoft will have to extend its Windows 7 support due to a bug that it introduced.